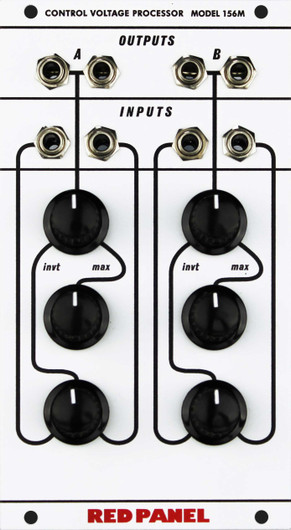 The 156 is an accurate reproduction of the original 156, however it’s accuracy also means that it’s functionality is based entirely on the needs of a cohesive system designed in the mid 60’s. It cannot work with negative voltages, the maximum gain is set at 1:1, and the transistor core makes it inherently nonlinear.

The 156M is a modern update of the original 156 that we feel both works within the paradigm of the original 100 series and helps to interface with modern eurorack gear. Like the 156, the 156M consists of two independent voltage processors. Each side can mix between 2 independent control voltages, This mix can then be offset by either a positive voltage or (unlike the original) a negative voltage. The mixed and offset control voltages can then be attenuverted – which allows the user to set the gain in either a positive or negative direction and can also boost the gain to approximately 1.5x the original signal. In essence, the combination of these three facilities allow you to mix, offset, compress, expand, invert, amplify, or scale any CV sour